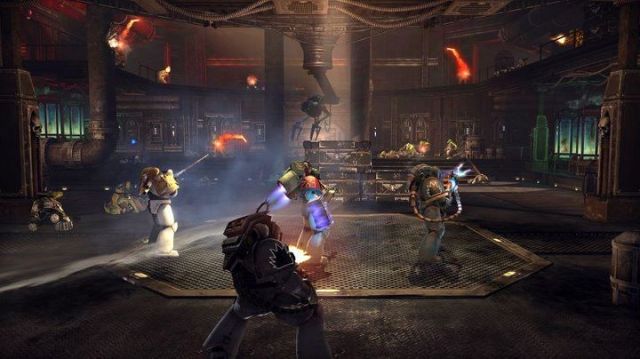 Battle Brothers!  Warhammer 40k: Space Marine is finally getting the promised cooperative mode, "Exterminatus."  For the Emperor, and all that stuff!  This is great news, because I've been holding off on the Space Marine review for over a month now.  I can't do a proper Co-Op Review if the game doesn't have co-op, can I?

"Exterminatus" is FREE DLC to all Space Marine players.  I put "FREE" in caps because every time THQ mentions the word "free" they cap the ever-loving crap out of it.   I think they want to make sure we know it's FREE.  It will be arriving on October 25th.  Yeah, that October 25th.

Space Marine's "Exterminatus" mode supports four player online co-op.  For this mode players will be using their fully customizable multiplayer character.  You and three friends will battle through two different scenarios, Assault on Hab Center Andreas and Escape from Kalkys Facility.  Players will face off against throngs of enemies while trying to complete dynamic objectives.  You'll earn experience points toward your multiplayer character and you'll also be able to use any perks unlocked through versus play. According to Eurogamer, this is the first of future DLC's, some will be free, some won't.  Curiouser and curiouser...  Let's hope they patch the lag issues that have plagued multiplayer versus modes.  (Why is everyone running in place?  Is this some sort of drill?  Why am I spontaneously dying?  Was my Space Marine terminally ill before he went into battle?  Who the hell is "Host," and why are we always waiting for him?  Why is he so special?)  I know they've issued several patches, but there are still some issues.  Which is a shame, because I really enjoy the multiplayer, and I'm not normally a versus kind of guy.

If you want our impressions of the game's single player and versus modes, you can check out our hands-on preview here.  We'll have a full review of the game as soon as possible!

Space Marine will support four player online co-op once the DLC hits on October 25th.  It is currently available for the Xbox 360, PlayStation 3, and PC.