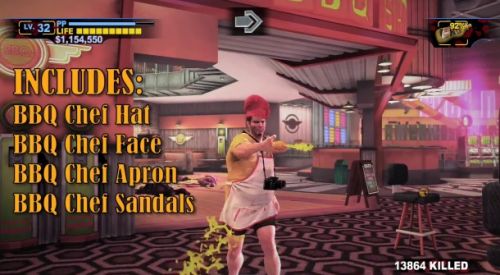 Lethal ketchup and mustard!  Do I need to say anything more?  The Dead Rising franchise is no stranger to bizarre costumes and powers, but this new downloadable outfit  for Dead Rising 2: Off the Record is delightfully ordinary.  The Chef Skill pack let's fat Frank West dress up like your standard backyard BBQer.  As usual, the new gear will grant Frank new abilities.  He can kill a zombie with condiments, slice and dice the undead with new knife skills, or melt a face off with a red hot frying pan.  Check out the video.  Mmm.  Smells like bacon.  The Chef skill pack will run you $2 bucks, or 160 MSP.

Dead Rising 2: Off the Record is out now for the Xbox 360, PlayStation 3, and PC.  It supports two player online co-op.