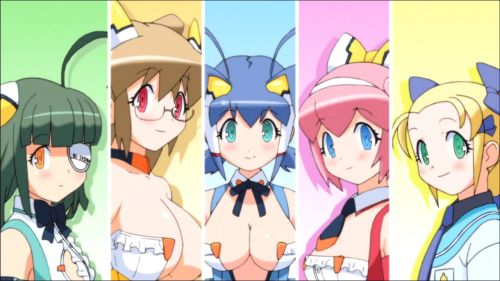 Otomedius Excellent is a 3-player co-op shoot-em-up from Konami. Besides carrying on the legacy of the classic Gradius series, the Otomedius games are most noteworthy for their unusual character designs. Rather than serious and masculine fighter pilots, players control a number of anime-style ladies who pilot ships inspired by other Konami titles. Some gamers may look at these flying femmes and exclaim ‘WTF’ letter-by-letter, but that would be missing the point. The girls of Otomedius lend the game a ton of Japanese charm and levity. Each one has her own personality and voice, plus completely different weapon loadouts that instill ample replay value.

Otomedius Excellent includes 9 characters on-disc, with two additional fighters scheduled to appear as DLC at a later date. Let’s check out the lineup: Madoka: She flies the Murdoch Viper 2, a TwinBee-themed ship. Diol Twee: Her Serenity Viper comes from Xexex, a little-known arcade shmup that was released as Orius in North America. Tita Nium: Not only does her name involve a clever pun, she also pilots the Bigcore Examiner, a ship inspired by the first boss of Gradius.