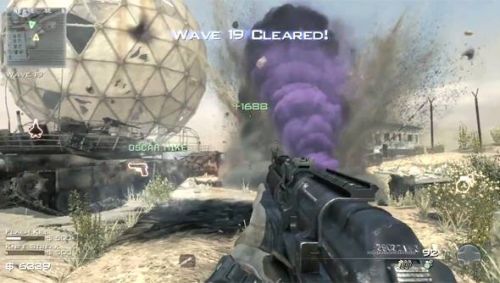 Call of Duty: Modern Warfare 3 is out today in what is sure to be one of the biggest games of 2011.  Co-Developed by Infinity Ward and Sledgehammer the game is the full package of single player, co-op, and competitive versus gaming.  But with any new release like this we felt it was a good time to remind you of just what co-op features to expect from the game.

First, to be clear, Modern Warfare 3 does NOT have a co-op campaign.  You can not play the game's story mode with friends at all.  The only CoD game to date to support this feature was Call of Duty: World at War, and sadly, no other title has replicated it.

Instead Modern Warfare 3 features two co-op modes, both listed under the name of Spec-Ops.

New this year is a mode called Survival in which two players face off against waves of increasingly difficult enemies.  In between rounds you'll resupply, buy upgrades and perks, and plan your strategy with your co-op buddy.  These matches take place on subsets of the multiplayer versus maps and have no end game.  That is - you simply play as long as you possibly can.  At E3 this year we managed to make it till wave 24.

The entirety of Spec-Ops is playble in both local split-screen (on console), online and LAN play.  Modern Warfare 3 does not contain the same "Combat Training" mode as Black Ops did to play the game's versus modes against AI bots.

Remember - Modern Warfare 3's team based versus modes are NOT Co-Op.  Here is the definition of a co-op game.

What is a co-op game?

A co-op game is a game where two or more players work together to accomplish a goal against AI opponents. Ideally the game will feature a strong story in which all players take part of. Co-Op can be online over the internet, offline on the same console, or via a LAN or Wireless Network. We do not consider team based games as co-op where players face off against another team of human players.

We'll have our full review of Modern Warfare 3 soon, so be sure to check back with Co-Optimus.  For now you can read our in depth interview with Glen Schofield of Sledgehammer.