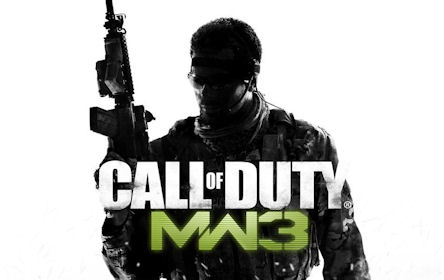 The headline says it all.  Call of Duty: Modern Warfare 3 broke the single day sales record for any form of entertainment that has ever existed.  This is the third year in a row where the franchise has claimed that title.  Activision reports that  MW3 sold 6.5 million copies in North America and the UK alone.  Now I could do something cute, and equate 400 million to something tangible for the common man, like 40 billion pennies.  Instead, I'm just going to offer two quotes from Activision's press release.  The first is from Eric Hirshberg, CEO of Activision Publishing:

Call of Duty is more than a game. It's become a major part of the pop cultural landscape. It is a game that core enthusiasts love, but that also consistently draws new people into the medium. It is the most intense, adrenaline pumping entertainment experience anywhere. I would like to thank our incredible teams at Infinity Ward and Sledgehammer Games for making a brilliant game. But most of all, I would like to thank our millions of passionate fans worldwide. We made this game for you.

That's a nice "thank you" for the gamers.  No matter what your thoughts are on the Call of Duty series, the fact that the game keeps increasing it's sales numbers is truly impressive.  Especially if you consider the fact that it's the same game every year (zing!).  The world is on the edge of a financial apocalypse, and yet CoD continues to do well. Coincidence?

The next quote just goes to show that Activision Blizzard is NOT a faceless corporation, gobbling up all of our pennies:

Activision announced this morning that in support and gratitude for the efforts of American servicemen and women, this Veterans Day it donated $3 million to the Call of Duty Endowment, a non-profit, public benefit corporation that seeks to provide job placement and training for veterans. This latest donation will be added to the $2 million that Activision has already donated to the Endowment, which has provided more than $1.5 million in grants and scholarships to veterans' organizations across the country since it was conceived by Bobby Kotick in November of 2009.