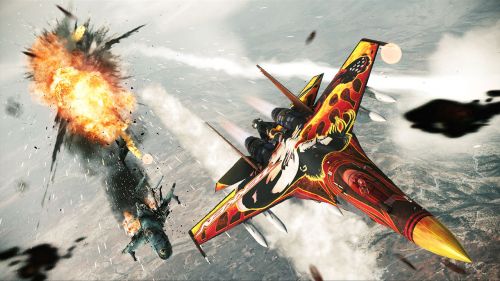 If there's one problem with today's aircraft it's that they aren't colorful enough.  Why fly the skies in a camoflaugh or silver covered aircraft that people have a hard time seeing?  You want to be bright, colorful and gaudy as possible so those bogies see you coming a mile away.  That way - they know you mean business.

It's a good thing that Namco-Bandai then has released a pair of aircraft skins for Ace Combat; Assault Horizon showcasing some bright and colorful Tekken characters.  Bright, colorful and loaded with some dude ready to punch you in the face?  Sounds like the deadliest weapon in the skies to me.

The two skins will cost you $4.99 on the Xbox 360 and PlayStation 3 and are for the Su-35 Flanker-E aircraft.  You'll have a choice between two characters from the Tekken game series, Jin Kazama and Kazuya Mishima.  Co-Op will never be the same.