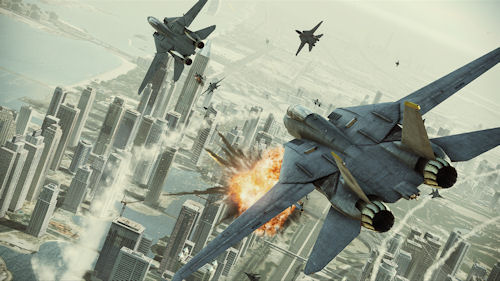 Ace Combat: Assault Horizon was a surprise game for me when it was released last year on the Xbox 360 and PlayStation 3; in my review I said it " truly competes with the likes of the Tom Clancy franchise games."  In the better late than never department comes the announcement of the PC version of the game is coming in Q1 of 2013 to be distributed by Steam and supporting co-op multiplayer via Games for Windows Live.

Bundled with the PC game for $34.99 will be many of the DLC that was released post launch.  According to the press release the game has been "optimized specifically for PC users" - though there is no mention of flight stick support.  Ace Combat: Assault Horizon supports 3 player online co-op through a variety of missions.

Along with the PC release, Namco-Bandai has stated a digital version of Ace Combat: Assault Horizon will be released on PlayStation Network and Xbox Live Games on Demand on December 18th.  For $20 players will get the original game, though PlayStation 3 users get a better deal with some included maps and additional aircraft.

Available exclusively on the PlayStation®Store the ACE COMBAT ASSAULT HORIZON + DLC Pack  will include the original PlayStation®3 game along with the Tokyo and Honolulu maps as well as six additional aircraft including the ASF-X Shinden II, F-15S/MTD, Su-37 Terminator, AV-8B Harrier II plus, CFA-44 Nosferatu , and Ka-50 Hokum.

The DLC pack of the game actually costs $29.99, all of that DLC is available separately on the Xbox.

Ace Combat: Assault Horizon was patched on both systems which addresses balancing issues and multiplayer exploits.  Finally, sadly, if you used the website integration of the game - Namco-Bandai is shutting down that service effective immediately.