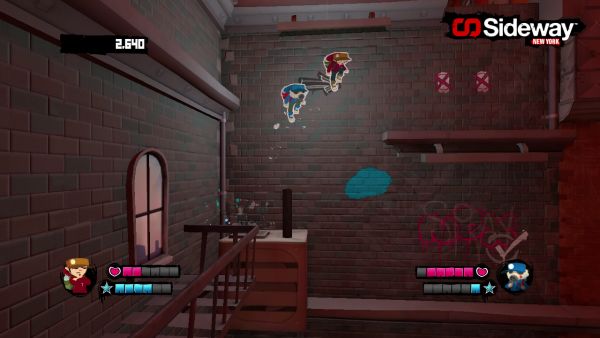 Sideway: New York hit the Playstation Network last month with a decent 3 out of 5 overall score, but a disappointing 2 out of 5 for the co-op. It appears that one of the best tactics for co-op success was for the better player to just keep moving forwards; player two was forced along anyway! If the thought of dragging your co-op partner around appeals to you as a PC player, then here is the good news. Sideway: New York is now available via Steam.

D evelopers Playbrains hired a Youth Engagement group to help optimise the game for PC and in keeping with this youth policy they are also running a competition with the headphone manufacturers Skull Candy. You can visit Skull Candy's Facebook page and upload a graffiti tag. The best will be transformed with digital magic and appear in the PC version of the game, and hopefully they will throw in some nifty head gear as well.

At a cost of $9.99, Sideway: New York is a solid title for a PC gamer looking for a bit of puzzle action combined with petty vandalism.