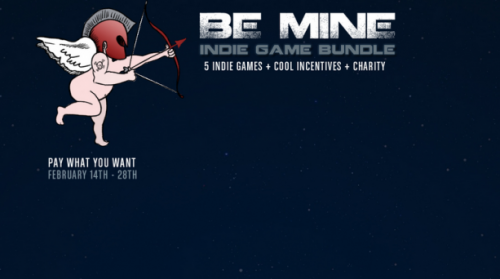 The Be Mine Bundle is a Valentine's Day themed 'pay what you want' bundle of indie games. There seems to be an indie bundle popping up every couple weeks since the Humble Indie Bundle pioneered this business model. I can't complain since I am a huge supporter of indie games, and this is a great way for smaller games to get exposure in the overwhelmingly large gaming industry.

The Be Mine Bundle's theme pretty much stops at the name, but the 5 games that are included are worthy of your love. Here is what comes in the romantic bundle:

The Bundle was supposed to be released on February 14th, however they ran into some server trouble and everything should be available today. Each game comes with a STEAM key and 3 come with a direct download if that is your style. Get out there and contribute what you think is fair, and don't skimp out because this is the best way to get money to the developers without delivering it straight to their door.

You can find out more information on the Be Mine Bundle from the official website.