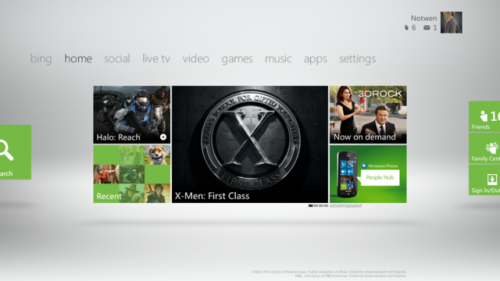 The fall Xbox 360 dashboard update is coming very soon. Tuesday, December 6 to be exact! The most dramatic update so far, it utilizes the tile-based Metro UI made popular on Microsoft's Windows Phone platform. But that's just the tip of the iceberg...

The upcoming dash includes a multitude of new features: full Kinect motion and voice control (yes!!!), improved avatar animations (not bad), a quick launch list of your ten most recently played games and apps (awesome), Cloud storage for profiles and save data, the ability to set beacons, which advertize that you’ll be playing a game at a specific time, and better Facebook integration. Those last two features will potentially enhance the online co-op experience. It also opens up a new App section which will include stuff like YouTube and UFC apps, and enables the forthcoming Windows Phone Xbox 360 Companion App's connectivity with the console.

The revamped dash is not all kittens and rainbows, unfortunately. It's even more overflowing with ads than the current version. The clutter of advertisements sometimes make it difficult to find the actual content you’re looking for. Premium themes, at least in the current beta version, lose some of their luster as Friends list backgrounds have vanished. Worst of all, the beta dashboard update completely broke the ability of one of my consoles to stay connected to Xbox Live through a router. My other system is fine though, and it’s apparently not a common issue. I hope with all my heart that it gets straightened out by December 6. It really sucks hate not being able to connect and play online games and watch Netflix with my main console.

The new dashboard look is all part of Microsoft’s plan to have a unified interface across all of their platforms. Next year’s PC operating system, Windows 8, will also go Metro.