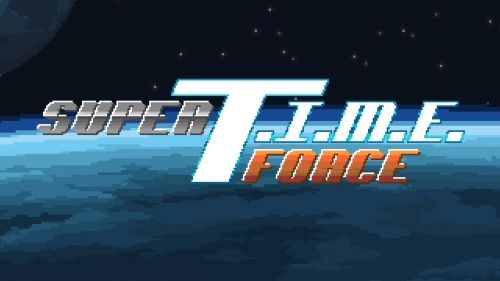 New Super T.I.M.E. Force screenshots have been released. But the question still remains: are all of those pixilated characters raging in a space battle of epic proportions involved in a secret a co-op mode hidden within?

I’ve never liked speculating anything when it comes to games, because usually I’m let down in some way. Either the main story ends in a way that is anything less than legendary, the gameplay isn't polished and lacks originality, or the multiplayer is completely broken. However, after seeing screenshot after screenshot of Capybara Games’ upcoming title, could I possibly be wrong for once? You can't be mentally sane and look at some of these pics without thinking this wouldn’t include co-op: (Am I the only one who noticed Robocop in the top-left corner there?^^^) If it’s anything remotely like its side-scrolling ancestor, Contra, it should hold at least some form of co-op play, even if it’s just 2 players only. But Capybara Games has yet to confirm anything as of 4 months ago on the release of their trailer. Forums across the gaming community are ablaze with questions about its multiplayer functionality, and I think the answer is clear to everyone who wants to eventually buy this game:

There needs to be multiplayer in Super T.I.M.E. Force. Period.

For the T.I.M.E. being (see what I did just there?), however, all we can do is speculate and imagine whether or not this pixilated wonder of a game will give us some form of friendly co-play come release. I just hope Capybara is already way ahead of us and will make the announcement during their showcase at PAX East this April.

Super T.I.M.E. Force will arrive on the XBLA and Windows phone in the near future (hopefully a date will be announced as well). Also be sure to check out the trailer here if you missed it, because you'll be kicking yourself later for not doing it sooner.