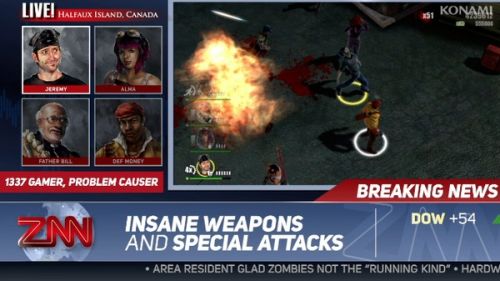 Living in Europe I have never had the pleasure of visiting Canada, but I imagine a huge country full of impressive vistas and vast Mounties.  What I wouldn't expect is another Zombie invasion (they usually stick to the major cities of America).  However, this is exactly the experience Konami supplied with Zombie Apocalypse: All Zombie Must Die and the game is being expanded with some new DLC.  How aboot that!

The Pure Pwnage Pack is available now for 400 Microsoft Points or $3.99 on PSN.  The pack includes access to the heroes of the original Zombie Apocalypse, a new map centered on an underground military bunker, and a new arena mode that will put you face to rotting face with an endless stream of zombies until you are dead, dead, dead.

Here is the press release to allow Konami to explain in their own words:

The undead never rest as there is now an underground military base on the island with test weapons, toxic waste, and an endless stream of zombies. Players can navigate the new arena that includes characters from Zombie Apocalypse 1, and an all new Pure Pwnage mode featuring Doug and Jeremy from the popular Canadian web series.

In Zombie Apocalypse: Never Die Alone, gamers play as four unlikely heroes who are put to the test when the Zombie Apocalypse hits their small Canadian Island. Banding together for both humor and survival, and armed with weapons including guns, chainsaws, and C4 teddy bears, the heroes must band together to find a way to survive the zombie hordes and get off the island.

Zombie Apocalypse: Never Die Alone Pure Pwnage Pack is rated M for Mature by the ESRB and is now available for download on Xbox® LIVE Arcade for 400 Microsoft Points and PlayStation®Network for $4.99.