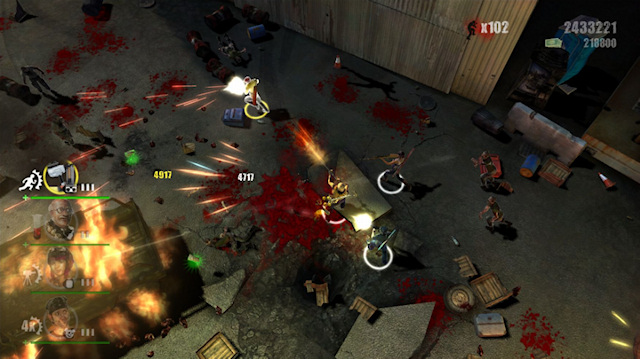 Official description of the sequel:

The game is a direct sequel to 2009’s Zombie Apocalypse, and newcomers Backbone Entertainment has created a stunning against-all-odds blaster, where four new heroes must attempt to survive a zombie uprising. The quartet is stranded on a remote island which is under siege from an army of the dead. Using whatever weapons come to hand, the player must scour the island looking for survivors and eliminating the flesh-eaters in order to create safe zones.

The action is viewed from an elevated position, with the player central to the action. As the undead attack from all directions, the player uses both control sticks to turn and shoot in all directions, with extra items discarded by fortunate survivors instantly added to an inventory. Zombie Apocalypse: Never Die Alone also introduces a new squad-based mechanism, which allows players to work together. A new class-based system allows users to switch weapons between each other, and also distribute powers and energy to those that need it.

To celebrate the impending sequel, the XBLA version of the first Zombie Apocalypse is on sale for 400 Points this week, half off the regular price. Sure, such an ancient and not-particularly amazing game should probably sell for that much regularly by now, but it’s the thought that counts. As for the PSN version, it's on sale for $6.99 (and $4.69 for PSN+ users).

I’m hoping the new class system and extended development time of Zombie Apocalypse: Never Die Alone help prevent it from playing as repetitively as its predecessor, which got pretty crusty after a while. We’ll find out when the zombies come a-calling on October 26.