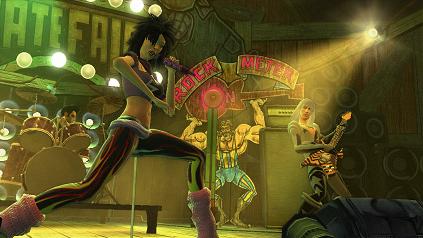 Guitar Hero: World Tour's release is almost upon us, and, as is often the case, a few interesting news items are popping up as a result.

The first bit, and most likely to make you scratch your head and say "Huh?" is the release of the first DLC for the game.  Yes, that's right, you can go ahead and download the first THREE track packs days before the game is even released!  Probably the most interesting part about these packs are the lower prices (same as Rock Band), the fact that you can download tracks seperately now (same as RB), and the inclusion of Rick Springfield!

If those songs don't pique your interest, then how about some hardware news?  Specifically, a premium guitar controller from Logitech.  This baby is sweet, for sure, with real wood and emtal components that will make you the envy of all your Playskool-worthy-guitar toting co-op buddies.  However, being so awesome comes at a price: it'll set you back $250.  Groceries, or a guitar?  Hmm.  Check out a gallery of the premium guitar controller here.  Guitar Hero: World tour launches Sunday, October 26.