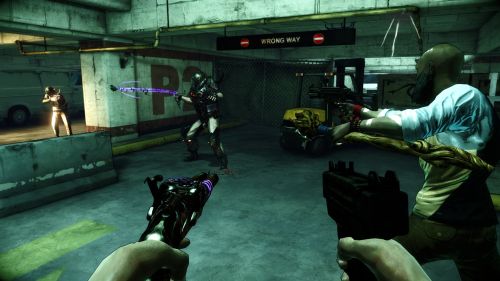 There used to be a time when game developers added a deathmatch mode to a game simply so they could have the multiplayer bullet point on the back of the box.  It seems though now we've gone a different, and much more preferred method, co-op.  Single player games have been adding a co-op mode to increase replayability and interest, titles like Mass Effect 3 and Syndicate spring to mind immediately.  The latest game to follow this trend is 2K Games The Darkness II which is out early next year on consoles and PC.

The Darkness II's co-op mode is called Vendettas and it's a four player online co-op mode with it's own unique story that intersects the story of the single player campaign.  This sounds like a great addition instead of simply tacking on a survival mode to the game.

The four characters in Vendettas are completely unique each containing their own strengths and abilities and even the option to level them up and choose skills as you play them.

-- Inugami: Wielding the mythical Kusanagi samurai sword rumored to have killed ten thousand innocents, Inugami is a dark and mentally unstable character with revenge-driven motives against The Brotherhood and their allies for the slaughter of his entire family. He can also use a swarm of miniature demons to attack and immobilize his enemies.

-- Shoshanna: Shoshanna is an ultra-efficient agent for Mossad, the Israeli Intelligence Agency, who was sent to New York to combat a spike in Brotherhood activity. Her obedience and devotion to her superiors makes her a perfect operative, and she harbors a passion for hunting and destroying evil in the world as part of her legacy. Shoshanna wields the Arm of the Night, a powerful weapon fueled with Dark essence and the power to fire multiple rounds of gunfire at one time.

-- Jimmy Wilson: A product of inner-city Glasgow, Scotland, and a notorious alcoholic, Jimmy believes The Brotherhood is simply another form of the Hated English that persecuted his family in the past, and he travels to New York to torment them to the fullest extent. He wields the Dark Axe, and has the ability to summon Darklings that he commonly refers to as "Little Jimmys".

-- J.P. DuMond: A former doctor from New Orleans, DuMond is burdened with guilt for using a form of Louisiana Voodoo to heal his patients. The use of dark magic drew the attention of The Brotherhood, an organization which J.P. is now forced to combat in order to halt their pursuit of evil relics. J.P. wields the Midnight Stick and can pull enemies into an anatomy-crushing vortex when he tosses his Box of Tricks -- a black metal box filled with dark power - into an open area. On top of the story mode in co-op, there's also a mode called "Hit List" which sounds a bit more like an arcade co-op mode.  Kotaku went hands on with the game's co-op mode and came away with some pretty solid impressions.

The level design was a bit simple, as was the "go in and clear the area" missions, but it was still fun. I especially enjoyed releasing Inugami's Swarm power. When I used it, it looked like a cloud of insects swarmed around enemies. Instead of standing transfixed, they squirmed and swatted at themselves as I worked my way through them, cutting them in half of shooting them down.

Controlling Shoshanna felt like a completely different experience. Her reliance on gunplay, especially that gun channeling skill, meant that I tended to stay further back. Her Arm of the Night shotgun did require a bit of close up work, but she still had an entirely different feel then playing as Inugami.

The Darkness II is out on February 7th on the Xbox 360, PlayStation 3 and PC.  We played the single player during PAX East earlier this year and were quite impressed.