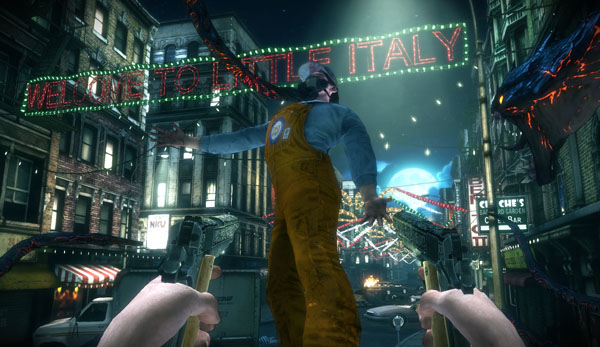 I must say, I was a pretty big fan of 2007's The Darkness, from 2K Games and Starbreeze. While the sequel had been acknowledged in the past, it was only recently revealed that Digital Extremes had taken over development duties, and have put together what appears to be a worthy followup to an already solid original.

The demo begins with Jackie being crucified in a dank room while a mysterious device appears to be siphoning The Darkness from him. A creepy fellow with sallow skin and rather unkempt hair makes a lot of noise about getting The Darkness back, then proceeds to monologue us back into a flashback to the events leading up to this scene.

It's two years after the events of the previous game, and Jackie Estacado appears to be on top of the world. He waltzes into a restaurant in a scene evoking one of the more iconic shots from Goodfellas and takes a seat with a pair of twins he's apparently had relations with recently. About a minute into their dinner, things go completely to hell. Jackie's enemies assault the restaurant, killing both of his dates and mangling his leg. In a short on-rails sequence, one of Jackie's men drags you through the restaurant while you whip out your piece and shoot everybody trying to get you.

The Darkness powers (obviously) return and are more brutal than ever. Your tentacles now operate independently from one another - the left one can stun enemies and grab pretty much anything that isn't nailed down (you can even choose where you want to grab an enemy), while the right tentacle can be whipped around to cause significant destruction to whatever lies in its path. You get analog control over what direction it swings, so it was incredibly satisfying to grab an unsuspecting goon by his ankle, then vivisect him with the right tentacle while he was helpless.

I was very impressed that your powers can now be used defensively - rip a car door off with your left tentacle and you can hold it up to use as a riot shield of sorts, then hurl it at your assailants. It was also particularly amusing to snatch up a piece of rebar and make a tactical insertion into the eye socket of an enemy. While we weren't privy to the system in this particular demo, it appeared that we were earning points based on how creatively we were dispatching enemies. Gunning a guy down gave a small amount while grabbing someone and doing a tentacle execution netted many more. We'll assume this is tied into an upgrade system of sorts.

The Darklings have been altered slightly. Rather than spawning them at will, you have a single Darkling following your violent misadventures who appears to be with you for quite a large portion of the game. He'll retrieve weapon upgrades for you, jump on enemies to distract them, and generally be an adorable little miscreant with a British accent and a penchant for relieving himself (it's acid!).

The developers were quick to point out that something they'd like to stress about the combat was how up close and personal it is, and what we played of it certainly showed it off nicely. It also happens to be rather horrifically violent, so if cleaving foes in twain isn't your thing, you're probably going to want to take a pass.

The art style has been changed quite a bit - the characters and environments have gotten a fresh coat of quasi-cel shading, as well as "painted" textures, giving the game a look much closer to that of a graphic novel. It's a lot nicer to look at than the previous game, that's for sure.

I was left wanting to play more, and that's always a good sign.

The Darkness II as of now, is a single player title.