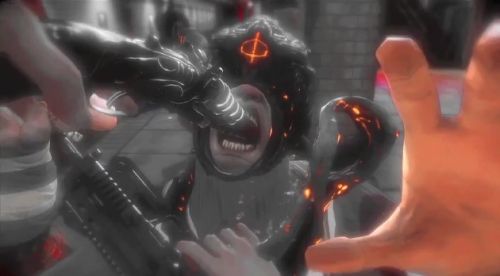 The Darkness was a pretty decent game that came out about five years ago.  Maybe you played it - maybe you didn't.  Either way, the game did well enough to spawn a shiny new sequel, titled The Darkness II.  As an added bonus, this new game appears to have a rather fleshed-out co-op mode.  In the cooperative "Vendettas" mode, players will control four new characters as they brutalize their foes with Darkness infused weapons.

The following video explains how these co-op missions will tie into the main story.  It's an interesting take on integrating a single player and co-op experience, and seems to be much more than the standard tacked-on survival mode.  Each character can be leveled-up and has their own story, which will add to the overall game experience. Check out these interviews with The Darkness 2 devs to see how the story unfolds, as well as some bloody action.

The Darkness II will be out on February 7th for the Xbox 360, Playstation 3, and PC.  It supports four player online co-op.  To see each of the new characters in action, check out this link.