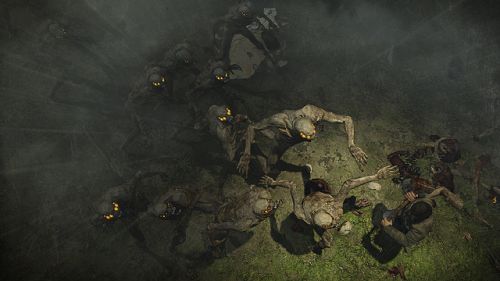 While we enjoyed the Resistance 3 campaign quite a bit, especially in two player co-op, we couldn't help but miss the co-op action that Resistance 2 provided in a more arcade like setting.  Lucky for us, it seems Insomniac is on their way to somewhat remedying that with the latest batch of DLC.

Called The Brutality Pack, the one map DLC adds a new survival mode for two players to enjoy in co-op.  You can play locally or online with a friend and try to survive wave after wave of the Chimera onslaught.  Also included in the DLC is some brand new music by metal group Mastadon.

But what has me most stoked personally is that the Brutality Pack fittingly features the music of the incomparable, Grammy nominated, Mastodon. We’re featuring seven tracks, including three songs from their just-released albumThe Hunter, two instrumental versions of Blood Mountain tracks and two special bonus songs from the deluxe version of The Hunter. Check out the brand new trailer that we’re releasing today to see the new gameplay mode in action set to one of Mastodon’s latest singles, “Spectrelight”.

Sadly the mode doesn't add any new Trophies and it doesn't allow more than two players - something we would have loved to see.  It does add the ability to unlock a sledgehammer weapon though...SMASH.