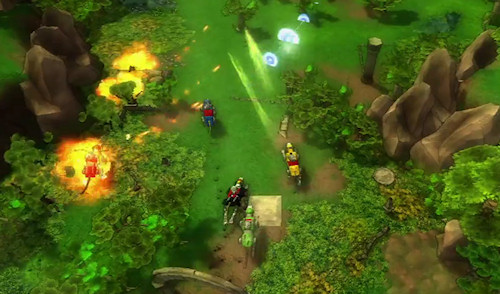 Voltron: Defender of the Universe has some new DLC for fans of the game.  The "Arena of Doom" offers a survival mode that can be played cooperatively with the five robot lions.  I was cleaning out my car and managed to find 240 Microsoft Points, so I ponied up the points and gave it a spin.  I've got to say, I wasn't too impressed.

Survival mode in Voltron: DotU is exactly what you'd expect.  You can team up with a couch buddy or four friends online and blast away at waves of enemies on a single, ugly map.  There's not a whole lot to it.  You can play for high scores and bragging rights.  I played through 17 waves on Beast King difficulty.  There was no forming of Voltron, no clips from the cartoon, and no change of scenery - not that I expected there to be.

The craziest thing about the "Arena of Doom" is that  the wave difficulty appears to be completely random. Enemies didn't get progressively harder, they just kind of showed up.  One wave could have tanks, while the next may have only a few foot soldiers.  Overall, it's a perfectly competent survivor mode, albeit an uninspired one.  It doesn't add $3 worth of content to a $10 game.  Keep in mind, I really liked the game itself, but only truly insane Voltron fans will get their money's worth.

Voltron: Defender of the Universe is out now for the XBLA and the PSN.  It supports two player local co-op and five player online co-op.