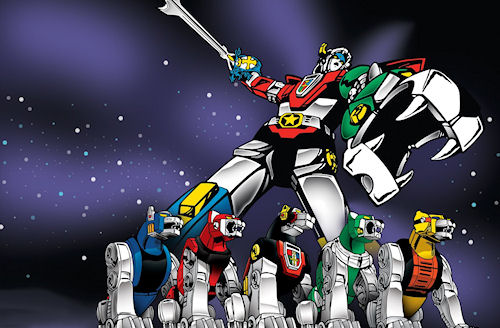 If I had to pick one cartoon above all others that I adored as a kid growing up in the 80's its without a doubt Voltron: Defender of the Unvierse.  It's pretty hard for me to contain my elation when I read that THQ looks to be creating a game based on the classic series to go along with new movies and a TV show created by World Event Productions - the current owner of the IP.

Voltron is a giant robot formed of five smaller lions of different colors.  Piloted by the Voltron Force, these lions fought against the Evil King Zarkon  (from the planet Doom) to save the galaxy.  Problem was, the lions on their own were never able to defeat whatever big baddy Zarkon threw at them - instead they had to work together (and form Voltron) to kick his blue pointy eared butt.

I think it's clear to see the co-op possiblities in the game.

The proposed THQ game might be based on a new Voltron cartoon that's launching called "Voltron Force" though the Variety article mentions a live action movie and toys based on the classic series.

Whatever happens, lets just hope they stay true to the source material in all mediums.