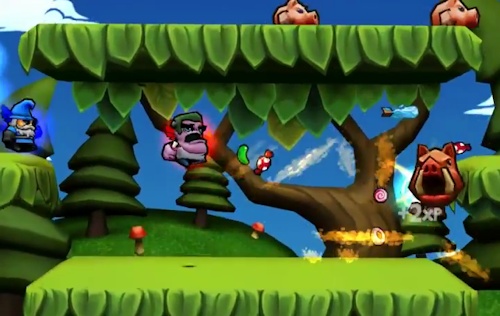 Look, we like rainbow farting unicorns as much as the next guy, but Muffin Knight - a new game from Angry Mob Games available on iOS, Android and Mac - looks to be the real deal in terms of unicorn farting simulations.  Sure Red Faction: Armageddon might have been the first game to incorporate it, but you couldn't actually PLAY as the unicorn and fart exploding rainbows.

So what is Muffin Knight?  It's a cartoon-like game where you choose from dozens of characters and hunt for muffins.  Find a muffin and you unlock another character.  What makes the game unique is the crazy cast of these characters you can control - from the aforementioned farting unicorn to a panda in a sumo wrestler outfit.    You've got Vikings, birds, frankensteins and dragons at your disposal to dispatch the numerous enemies.

Right now the game only features versus multiplayer where players race to get the most muffins, but the game's developer is planning a co-op mode for version 1.5 of the game - which should be out later this month.

Here's out it's going to work:

You can snag Muffin Knight right now on iPad, iPhone, and Android for only $0.99.  There's also a Mac version available on the Mac Store for $4.99.  All version are compatible with each other so it sounds like there should be plenty of players to find to play either via local wi-fi or online through GameCenter on iOS.