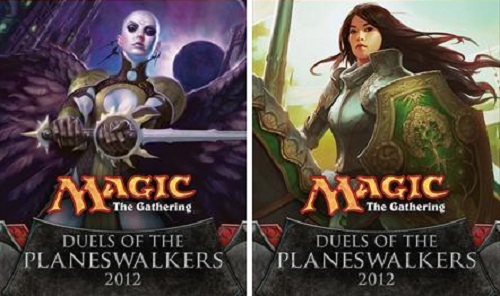 A new Magic: The Gathering - Duels of the Planeswalkers 2012 deck pack launched this week.  This is the third such pack to hit the downloadable card game.  Simply titled "Deck Pack #3," it includes two new playable decks for use in both the single player, multiplayer, and co-op modes of the game:

Includes “Beknighted,” a white deck filled with honorable Knights waiting to prove their dominance on the battlefield, and “Trinity of Elements,” a speedy blue, red, and green deck that blitzes the enemy before a defense can even be conceived of.

Deck Pack #2 was launched in that hazy time between Thanksgiving and Christas last year.  Here are the details for that expansion, in case you missed it:

Includes “Dark Heavens,” a white and black deck featuring a celestial alliance of Angels and Demons, and “Forest’s Fury” a green deck featuring colossal Treefolk on the rampage.