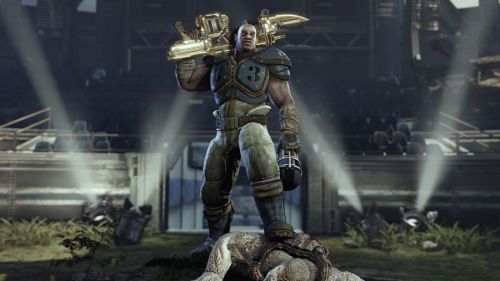 A new title update is out now for Gears of War 3 on the Xbox 360 and with it comes numerous tweaks, fixes, and balancing improvements for both Horde and versus gameplay modes.  The title update should be out now, just in time for the Fenix Rising DLC which should hit Xbox Live tomorrow.

The Fenix Rising DLC adds five new maps for Horde, Beast and Versus; as well as four new multiplayer skins.  If you have the Gears of War 3 season pass, you'll be getting that content automatically, otherwise it'll set you back 800

All unlockable and non-purchasable characters are unlocked for System Link play. Online play still limits players to characters that they have unlocked or have purchased through DLC.

“Classic” stalemates are now enabled on the Execution and Warzone playlist. An option exists in private Execution to disable classic stalemates and re-enable the man-up rule.

The ghost camera can be raised and lowered using the Xbox controller d-pad.

“Must Active Reload” mutator has been made more restrictive. Issues with the Torque Bow and OneShot have been fixed.

Holding the “Y” button before being in range of a DBNO player and then walking into activation range will start the execution sequence. This is similar to holding “X” to queue up a weapon pickup sequence when walking into range of a dropped weapon.

Fixed the OneShot exploit on Drydock. Players will be pulled out of the OneShot mounted pose when in certain positions.

A second player signing in on the loading screen before entering the pre-game lobby will no longer cause profile issues.

The map cycle in QuickMatch is now randomly ordered.

DLC that is not owned by the current player will no longer stop the player from using DLC they do own.

Horde will no longer use the Versus weapon swaps. Horde players will have Hammer of Dawn and Mortar spawns on Overpass again.

Fixed the lens flare on a scoped Longshot not appearing for a player facing left.

Xbox system notifications have been moved out of the way of kill messages in competitive multiplayer. They now show up in the top center of the screen.