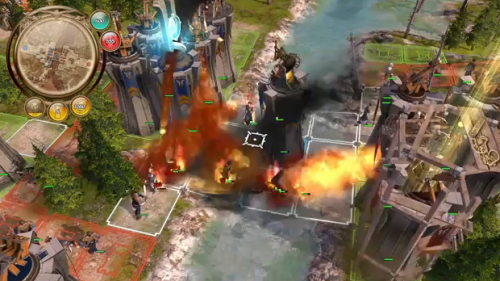 Recently Paradox Interactive and Most Wanted Entertainment have released a new video showcasing their newest game, Defenders of Ardania, giving us a new reason to have our eyeballs glued to our computer screens.

Set in the beautiful world of Majesty, players use various sentry towers to hold off hordes of enemy units, while simultaneously producing their own magic wielding units to break through their opponent’s towers. Now, you might be thinking that this is going to be your standard Tower Defense game. However, what helps make Defenders of Ardania so unique to most others are the subtle RTS elements of the game. Almost like a hybrid of Warcraft and Defense Grid, Defenders of Ardania combines the styles of both Tower Defense and RTS genres to provide a much larger skill gap than most other “pure” Tower Defense games may already have.

Although there is a single player portion to the game, the main focus is clearly given towards the multiplayer aspects. Up to 4 players can choose to team up over the Internet, LAN, PSN, or XBLA to defeat CPU opponents, or even decide play against one another if they so please. The number of co-op options this game provides, along with its unique style towards the Tower Defense genre, gives Defenders of Ardania the potential to be one of the best TD games in the industry.

Here’s a brief video on Defenders of Ardania’s gameplay and its new, intriguing multiplayer aspects:

Defenders of Ardania has still yet to announce its release date or even retail price, but that doesn’t mean we won’t keep its name in the back of our head for the time being. For now, just remember the game’s awesome slogan: