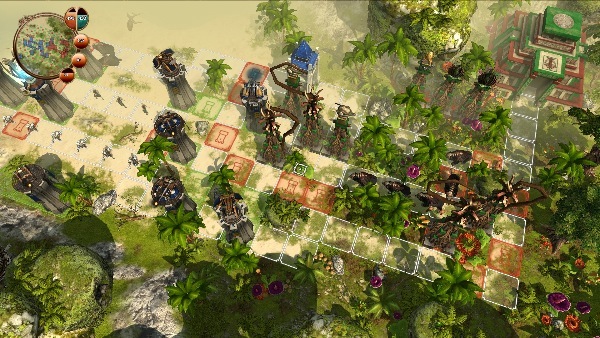 Comp-stomp co-op is becoming a fairly prominent form of co-op in PC-heavy genres like tower defense and RTS's, so the combo style game Defenders of Ardania is exactly that in beautiful 4-player compstomp co-op on platforms across the board. The demo was playable on iPad since that version is furthest along, but PC, XBLA, and PSN will host the game as well.

Defenders of Ardania at first glance is a Tower Defense title, since that's the primary foundation of the game. Starting up you have a castle to defend with a designated area between your castle and the enemies castle to build towers. I only played the iPad version, which is going to be a bit different than the PC, XBLA, or PSN towers, while still including online comp-stomp co-op. The iPad version at least, is balanced in sets of threes for a rock-paper-scissors effect.

Your towers include arrow air defense, cannons for burst attacks and flame-thrower-style towers for wide areas of enemies. These towers aren't your only arsonal, since you'll have 6 units to use to attack. Your first set of units are castle attacking units; fast units, heavy-hitting slow units, and flying units that will directly attack your opponents castle without worrying about troops. Your second set of units are unit attacking units, which also come in fast but weak (tower attacking), heavy (troop attacking), and manual magic attacks (you click on an area and it's bombarded by magic, not an actual unit but it costs resources like a unit).

Units vary depending on your class - I didn't get to check those out in depth, but they appear to be different units with the same or similar abilities. They look different, as do the towers, so they add a lot of variety in the game. The levels also appear to have a lot of depth and variety in them to make the game visually stunning, but again I wasn't able to explore any of those aside from the screenshot taken above. Playing the game is straightforward and simple, but in-depth strategy is required in order to do well. The player will select either unit building, or tower building. Unit building is on a circular pattern where you select whatever unit you want, and they come out of the castle one at a time in the order you buy them. In order to select towers, you'll choose the type of tower you want, select where to build it, and confirm by selecting the area again. Towers and units build quickly, but cost resources. Units will also level-up as you use them. So if you favor the fast unit, building many of them in a row will make that type of unit stronger when you build them in the future. A green outline around that unit's purchase icon indicates how close they are to leveling up.

Collecting resources is ridiculously easy and doesn't require micro-managing at all. You'll earn gold by either building on a resource rich square (it's obvious, since it's glowing gold colored), killing enemies, or slowly over time. Defending the tower on the resource rich square becomes important, but that is easily remedied by building additional towers around it so the enemy tower-attackers can't touch it.

As you push the enemy back, the area around the castle in which you can build expands toward the enemies base, until you can basically build on their front porch. Overwhelming the enemy is fun, but you also have to be careful since their tower-destroying troops can get to you faster. Balancing speed and strength, range and attack is important here, and works really well on the iPad version of the game. While I wasn't able to see any of the co-op, I was told the gameplay would be heavily comp-stomp style where you play up to three players together versus an A.I. bot player - any mix-and-match of that kind. It behaves much like a survival mode with the oncoming attacks, but you can actively launch your own counterattacks as well.

Players will gather online, each with thier own castle, but you can choose teams. I wasn't even able to see the co-op, but it sounds promising with the style of gameplay, especially for families with a mixture of hardcore, casual and every in-between type of gamer on the map.

Very straight forward design makes it great for all types of gamers, but the in-depth strategy to take out the enemy, build towers and units, and keep your castle stronghold alive satisifies even the more hardcore of us.