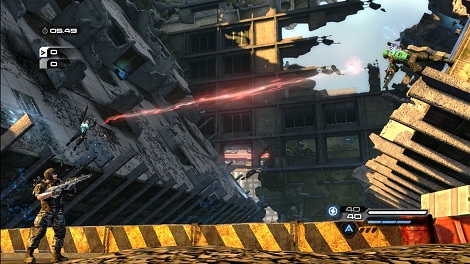 Inversion is a game that is increasingly becoming the new British Railway System - continually delayed. It’s gone from being a 2010 release, to February 2012, to sometime in 'spring 2012'.  If these new multiplayer screens are anything to go by, when the game does eventually arrive, it will likely do so upside down. Check out Read More for a taste of how insane the multiplayer in the game will be.

As well as having an online versus mode, Inversion also has a 2 player co-op campaign. You play as Davis Russel, a cop, and Leo Delgado, his neighbour. Let's hope this is a neighbour with keen gun skills and not just the ability to borrow the lawnmower for too long. Together they are fighting against an alien force known as the Lutadore - sound a bit like lunatic matadors to me, but they aren't!

Until some unknown date in 'Spring' you can get you gravity defying fix below.