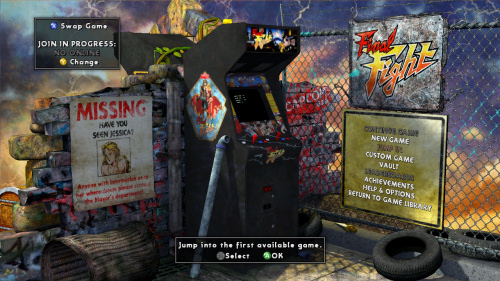 Maybe you've been looking at picking up some Capcom titles on Xbox Live Arcade? You might want to wait until later this spring. The rather blandly-named Capcom Digital Collection is headed to retail release in late March. The  disc bundles eight of Capcom's better downloadable offerings, several of which are co-op. 1942: Joint Strike, Bionic Commando Rearmed 2, Final Fight: Double Impact (pictured above), Flock!, Rocketmen: Axis of Evil, and Wolf of the Battlefield: Commando 3 all feature co-op gameplay; for details, check out the links. Rounding out the set are two very popular games that lack co-op but are still pretty awesome: Super Puzzle Fighter II Turbo HD Remix, and Super Street Fighter II Turbo HD Remix.

Downloading all those titles to your hard drive would take up quite a bit of space, and the equivalent of $100 in Microsoft Space Points. Buying the disc-based version will only run you $40, and considerably less storage space. It's a stellar deal on some excellent downloadable titles, so if you haven't picked most of them up already, holding out until March sounds like a good idea.