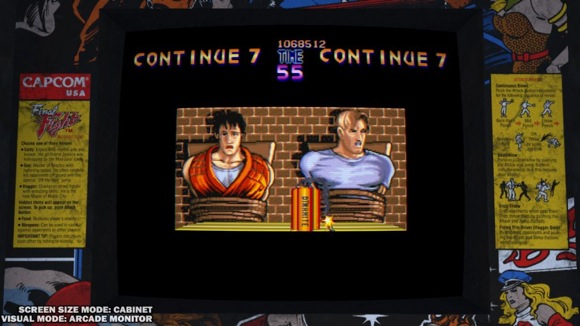 [Updated below] It seems like PSN users are almost required by Sony and Capcom to play co-op with their copies of Final Fight Double Impact. It turns out that Final Fight will not play on your PS3 if you are not connected to the network. Even if you're playing local multiplayer or single player, you're still required to have your PS3 connected to play.

If you try to fire up Final Fight while not signed in, you'll get an error that says "Sign into PlayStation Network. (80029516)." That means, if you have been sitting on an hour-long update and install before the PS3 will allow you to connect, you have to sit there for an hour before you can play even the single player. This may not seem like a big deal, but it is kind-of odd, and unfortunate for those that can't always be connected to The Network. Or, as JC Fletcher of Joystiq jokes:

"Anyone else appreciating the irony of having to be connected to the internet to play games made before most of us knew what an internet was?"

We have now read a public apology from Capcom about the unannounced DRM associated with the PSN version of Final Fight Double Impact.

Capcom didn't exactly apologize for adding DRM to the game itself, but more for not telling people that there was DRM in the first place. They will be working with Sony to "address" the issue - but it sounds a little unclear about the final intentions, kind of like a lawyer wrote it.

"Capcom would like to formally apologize for the issues consumers are having with the PS3 version of Final Fight: Double Impact. Typically, the notification for a required PlayStation Network connection appears in the full game description when a game is downloaded from the PlayStation Store. Unfortunately when populating this content this detail was overlooked and wasn't included in the versions of the game that released in North America and Asia. It was included in the release for Europe. Capcom should have checked to make sure the notification was included when the final game was made available and we sincerely apologize for this oversight.

The DRM requirements for Final Fight: Double Impact are not unique to this release. This protection mechanism has been implemented in numerous games offered on the PlayStation Store before. When it was brought to our attention that the notification was missing, we acted quickly with Sony Computer Entertainment America and a fix is on the Way.

We would like to thank our vigilant fans for bringing this to our attention and we will exercise better scrutiny on future Capcom releases.