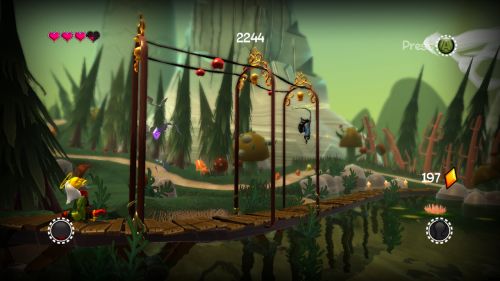 When Scarygirl launched on Xbox Live Arcade last week, many thought the 1200 MS Point ($15) price a little too steep. It looks like somebody at either Microsoft or Square Enix agreed, albeit belatedly. The Playstation Network version launched this week at $9.99, and now the XBLA version has dropped down to the equivalent 800 Points as well. That certainly makes the teen goth platformer more palatable.

Now, price drops are usually a good thing. And let's face it, Scarygirl was destinated to bomb at the $15 price point. Only games with big advertising budgets and/or established franchises ever succeed at the top end of the pricing spectrum. But I can't help feeling sorry for the poor folks who bought the XBLA version at launch only to see the publisher knock five bucks off only a week later. Remember how cranky the 3DS price drop made some early adopters?

In the long run, it's the game people will remember, not the price. Scarygirl is a 2.5D platformer with a dark and quirky aesthetic. More importantly for us is the 2 player local co-op feature. If you're dying to know how well Scarygirl pulls it off, stay tuned for our full co-op review.