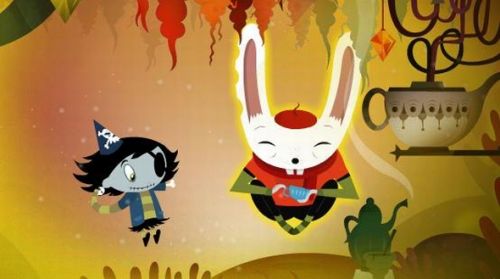 Square-Enix dropped Scarygirl on Xbox Live Arcade with practically no notice. But it's here now, and we all have to deal with it one way or another. Based on the still-kinda-expensive-'cause-it's-hardcover graphic novel by Australian artist Nathan Jurevicius, Scarygirl is cute, slightly creepy, and co-op - a fine combination.

Have you, like me, been unfamiliar with Scarygirl up until now? The official description:

Based on Nathan Jurevicius’ Scarygirl graphic novel – winner of the 2009 Aurealis Award for Best Illustrated Book/Graphic novel – Scarygirl presents a wondrous adventure into a distinctive and beautifully bizarre world.  The titular character Scarygirl is an abandoned child with a tentacle arm who dresses like a pirate, and is haunted by a strange man in her dreams. She sets out into the world to discover the meaning behind her bad dreams, but Scarygirl is hardly helpless, as she has a tentacle-powered arsenal up her sleeve.

During her adventure, Scarygirl will be aided by her friends and guardians from the graphic novel, Blister the giant octopus and Bunniguru the mystical, kung-fu rabbit. Her friends and an ever-improving arsenal of combat moves will help her face down enemies like the adorably deadly hedgehogs of the Owl Woods, the violent Goat Clan along the Old Man Mountains, Hairclump spiders deep in the Stinky Swamp, and the most enemiest enemies of all: the clueless crossing guards around Bad Town!

It's definitely got some charming 2.5D visuals and a theme that's different from most other downloadable titles. Drop-in, drop-out local co-op doesn't hurt either. One player controls 'Girl while another takes the role of Bunniguru, her ninja-like rabbit companion. He plays differently than his partner and they can even perform co-op moves together. Not too shabby.

Scarygirl is now available on Xbox Live Arcade for 1200 MS Points ($15). The PSN version arrives Tuesday, January 24, while the PC version is still 'coming soon.' We'll have a full co-op review of the XBLA version soon.