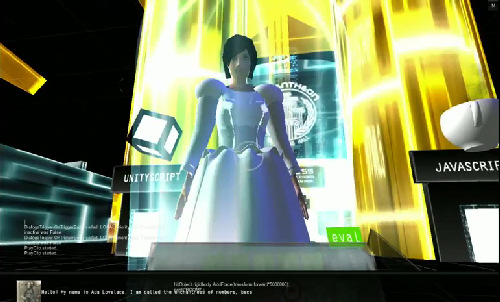 A lot of gamers dream about the day they can create their own game.  They are simply brimming with ideas for the next form of interactive entertainment, but the technical hurdle of actually programming can seem insurmountable.  A new game by Primer Labs aims to change that by combining the act of gaming with the art of programming; it's called Code Hero.

The concept of the game is simple, it's a shooter like experience where players have a code gun that is used to solve puzzles.  The gun literally shoots pieces of textual code into the game world.  The game's genius comes from how this is presented - as players see how a piece of code actually changes the game world in realtime they slowly learn to understand it piece by piece.

Code Hero will feature famous programmers like Charles Babbage and Ada Lovelace to act as mentors through the process.  The full game promises to support co-op play as well.  From my personal experience, this is the best way to code too!

The project is still in its early stage and right now they are trying to use Kickstarter to drum up enough financial support to make it to publication.  You can get into the beta for as little as $1.  With only a few days to go in the Kickstarter Campaign it doesn't look like they'll reach their goal without some serious support.

More info about Code Hero can be found on the official website.

You can check out the Kickstarter Campaign right here.