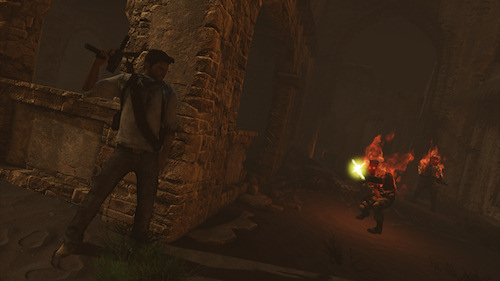 Uncharted 3: Drake's Deception is getting a new map pack today called the Flashback Map Pack #2.  While this content update won't contain any new co-op modes like the last DLC, it will contain a bunch of remastered maps from Uncharted 2 playable in both competitive and co-op survival gameplay.   The maps - Plaza, Temple, Train Wreck, and Village - have all-new dynamic lighting effects, innovative particle effects and tons of other fresh technical polish thanks to the Uncharted 3 engine.

Along with news of this map pack comes word of the next piece of co-op DLC called "Co-Op Shade Mode."  No details were given, only the above screen shot was shown.  According to Naughty Dog this content should be out next month.

The Flashback Map Pack #2 will be out today with the latest PSN update for $9.99 or it is included with the Fortune Hunter's Season Pass.