Mercenaries 2: World in Flames, otherwise known as Mercs 2, is a fully enjoyable game whether you are playing it by yourself or with a friend in co-op.  It is unfortunate you can only play co-op over Xbox Live or the PlayStation Network and not locally, but the whole experience ends up being an awfully fun co-op situation.

Mercs 2 is set about two years after the events of the first game given the ages of the returning characters: the badass Swede Mattias Nilsson, American muscle Christopher Jacobs and the beautiful Chinese born English citizen Jennifer Miu.  Much like the last game each character has one ability that stands out:  Mattias recovers health quickly, Christopher can hold more ammo and Jennifer can fun fast.  This time around they are hired by Venezuelan businessman Ramon Solano to free a captured general named Carmona.  From there the story takes off with numerous twists and turns as you become a mercenary for hire.

This game is set up much the same as the original with a variety of factions to accept contracts from and your choice of being friendly or hostile toward them.  Each faction has targets they want you to hit to receive even more money and you have to be careful here not to take out targets from friendly factions (unless you want them to get angry).  A major new addition to the game are NPCs like the helicopter pilot, mechanic and jet pilot.  Each one has special abilities like picking up munitions, raining down air strikes or building special vehicles.

Mercs 2 is all about destroying things to finish contracts to get money to buy bigger explosives to destroy things.  Add into this the ability to play through the whole experience in drop-in/drop-out co-op with a friend and the game becomes all that much more fun to play.   Co-Op is incredibly accessible.  In the menu there is an option to open your game to friends or to the world, and so either can join in through the friends list or the in game menus.  Of course you have the option to close that off; but why would you do that?  Your character from single player and co-op is persistent, so you can bring him or her into any co-op game with all money, oil and weapons in hand or you can start a new character when joining.  Co-op makes many of the harder missions easier since you now have the ability to cover two points instead of having to do everything yourself.  The game doesn't appear to scale the number or difficulty of enemies in co-op, but it's still challenging enough.   All the cutscenes are viewable in the game while playing co-op unlike the recently released Too Human.  Vehicles are shareable with a driver, passenger and gunner; and a bonus ability is to bring up your PDA and navigate while your partner drives. 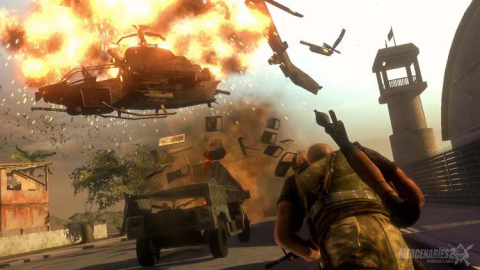 The only minus is that any ordinance that is bought in a co-op game goes to the hosting player, but you are still able to accumulate money. There's no weapon exchange or trading,  though you can pick up weapons that your co-op teammate drops.  Honestly the weapons and ammo are so readily available in the game while unloading destruction that there's no need to resort to trading between each other.

Mercenaries 2: World in Flames is incredibly entertaining in co-op, both intentionally and unintentionally.  The open world of the game lends itself well to co-op play, and the missions, action and vehicles work well with a partner.  The unintentional entertainment factor comes from the goofy physics model and the difficult nature of actually dying.  Blowing shit up with your buddy nearby only to watch his body flop and toss across the land scape NEVER GETS OLD.  While the game isn't perfect or groundbreaking, it is fun - and that's really all that matters.

The Co-Op Experience: Background: World powers with deep pockets are willing to pay you to create chaos and do their dirty work. Mercenaries 2 features the latest and most dangerous in civilian and military tech, everything from tanks, APCs, boats, shiny new sports cars, to even a satellite-guided bunker-busting mini-nuke. These are your tools, use them well. You are not a soldier. You are a mercenary. Everyone will try and screw you, given the chance. They think they can get away with it, because they don't know rule number one: Everybody pays. Play the main campaign with the help of your friends. Jump in and out of a game at any time.