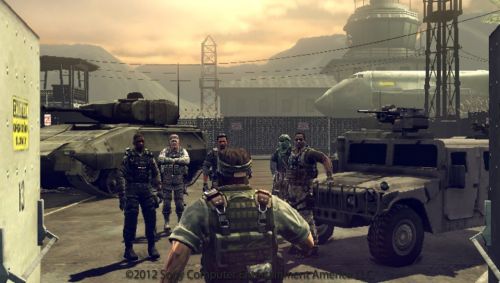 A demo is out today for the Zipper Interactive created 3rd person shooter on the PlayStation Vita called Unit 13. The demo for this tactical game offers up the training mission which has an obsession with beards as well as one map with all six operatives playable.  The download weighs in at just under 1 Gigabyte, so it might seem a bit light on content in relation to its size.

While the demo version doesn't offer any co-op play, it does give you a good feel for the game.  The missions themselves seem to let you play them how you want.  If you want to complete the objectives using stealth, you can do that.  If you want to go guns a blazing, you can do that to.  Each kill and action works towards a meter that helps increase points of further actions - it seems high scores in missions are a big focus.

The actual actions in the missions vary and they come up in stages with HQ giving you orders on the fly. Usually they involve in getting from Point-A to Point-B and finding some panel or object to interact with using the touch screen.  Don't worry, you won't be drawing any fancy diagrams, it literally is just a tap on the screen. Speaking of the touch screen, the game utilizes it in a great way, making it almost like an extension of the controller.  You can tap icons to reload weapons, toss grenades, or swipe while in cover to change shoulders for aiming.

Graphically the game looks solid - textures, lighting and effects are all gorgeous looking.  Overall this feels like it'll be a solid addition to the Vita's library.  The demo mission took about 10 minutes to complete and in doing so, it contributes experience to a global ranking.  The good news is all of this stuff will transfer over to the full game when it launches in two weeks.

The full version will offer two player online co-op when it launches through the missions - and in areas where it has you going back and forth to hit switches, I can see it being very beneficial.  Unit 13 looks to be another solid co-op title to add to your Vita library.