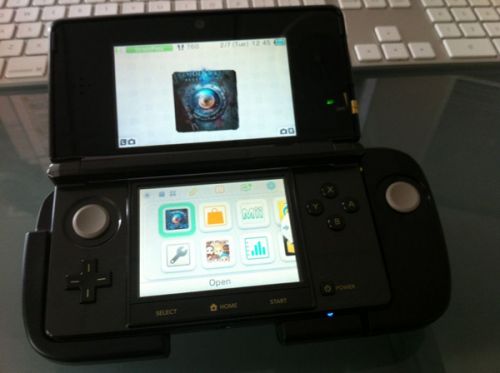 As with almost all portable hardware releases these days, everybody wants to create laundry lists with their faults. At the top of most people’s list of 3DS grievances is the lack of a second analog stick/slider/whatever. This was also a problem for the PSP, but at least Sony could claim that they were treading new ground.

In any case, Nintendo, by way of apology and continuing their trend of having to take a second stab at control methods for their systems (Classic Controller Pro or Wii MotionPlus, anyone?) has unleashed their latest boondoggle on the world: the Circle Pad Pro.

If you don’t know already, the Circle Pad Pro is an add-on peripheral to the 3DS that adds a second circle pad (analog slider) along with a second set of shoulder buttons to your 3DS. Just drop your 3DS into it cradle-style, and it will communicate with your system via the IR port, but only when you’re in a game.

Let’s get the obvious out of the way: this thing is bulky and the fact that it’s almost a necessary purchase for anyone wanting to play some of the more serious 3DS games coming out is a sad state of affairs. Since it greatly increases the size of your system, it reduces its portability, and the fact that you have to supply a AAA battery to power the thing only exacerbates the 3DS’ battery life issues. Having used the CPP for several weeks now, including during the review process for Resident Evil: Revelations, I can say that despite all of the caveats listed above, it works as advertised, and makes games like Revelations and the recently-released Metal Gear Solid 3: Snake Eater 3D much easier to play and control. It is VERY hard to go back to the default control scheme after using the CPP.

When a Circle Pad Pro is present, games adjust their control schemes accordingly. Resident Evil Revelations completely swaps the layout to account for a second analog stick, and many of the commands requiring use of the face buttons are remapped to the shoulder buttons. This makes life much easier for the player, and during my co-op sessions of Raid Mode, it was very easy to tell which players had picked this peripheral up. For one, we’re able to move and shoot.

So, should you buy this thing? If you currently have a 3DS and plan to play titles like Resident Evil: Revelations and Metal Gear? I’d say so. Doubly so if you (like me) are left-handed and wish to play the upcoming Kid Icarus Uprising.

If you like to game on-the-go and value the portability of your system over all else? You can safely pass on the Circle Pad Pro. I’d be willing to bet that Nintendo’s inevitable hardware refresh of the 3DS will include much of what the CPP offers you, and without the bulk.