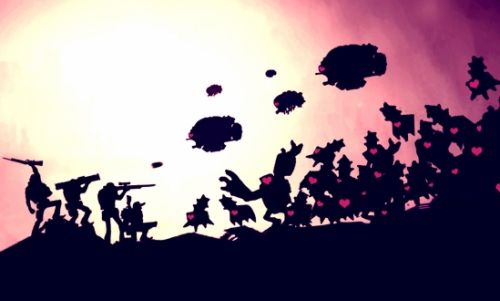 Awww, isn't that nice?  Those robots are trying to murder-hug a gaggle of P. Walter Tugnuts.  I had a joke about four Tugnut's walking into a bath house, but I appear to have misplaced it.  Oh well.  Please assume it was high-brow and the epitome of taste.  The robots must have huge heart-ons because the Shoot Many Robots release date has been announced.  Grab three friends and shoot all the damn robots on March 13th.

We're more than a little excited about this game.  The Co-Optimus mascots, Billy and friends, will be making their gaming debut in the side scrolling shooter, taking the form of a stat-boosting backpack.  SMR should offer more depth than your standard blast'em up.  How do you add depth to a game?  Include character customization and sweet loot, of course!  Check out the evolution of SMR in the following video:

Shoot Many Robots will be available on the PlayStation Network on March 13th and the Xbox LIVE Arcade the following day.  It will cost $10 bucks, or 800 MSP.  It supports two player local co-op and four player online co-op. It also supports two player combo co-op, where two local players can play with other online players.