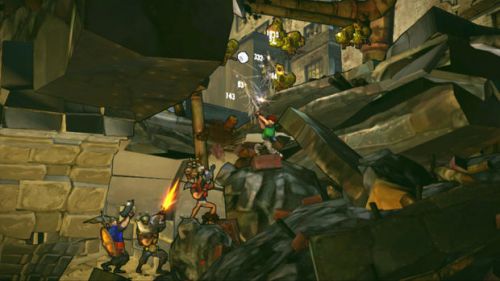 To say we're excited bout Shoot Many Robots around Co-Optimus HQ is an understatement.  Having had hands on time with the game and knowing just how ridiculously fun it can be has had us frothing at the mouth for nuts.  That didn't come out right, you see - when you kill robots in SMR they drop nuts and bolts.  Which is then used to upgrade your character and buy unique items.  Unique items like....BILLY A FRIENDS!  Hell yeah!

Destructoid went hands on with the game recently, and like us, they'll will have a character from their site featured in the game.  They talked a bit about how the co-op plays out, including some technical aspects.  The question of - "can I join a game even if I'm not that far" has been answered almost immediately.

Demiurge wisely allows players to join a friend's match regardless of whether their own progression has reached the selected stage but it's a double-edged sword.

What double edged sword you may ask?

As a result, when the time came for us to begin, I had them at a bit of a disadvantage in terms of abilities which translated into my soundly beating them out for high scores at the end of each stage we played. Meanwhile they put me at considerable risk by adding more enemies to the mix and not being able to kill as effectively, so I had to adjust my strategy to make sure I could keep them alive if necessary.

Game design folks.  It's all about the risk vs reward scenario.  The preview goes on to say that the reward in this case is the ability to purchase more items and more upgrades, making Shoot Many Robots an addictive loot gathering Contra like game.

Shoot Many Robots should be out this Spring on XBLA, PSN and PC.