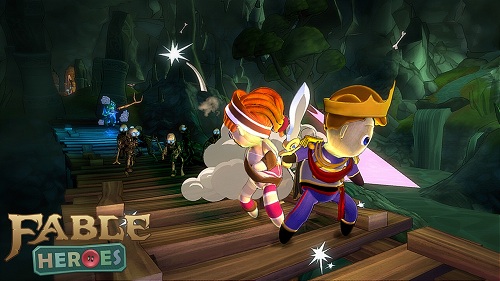 The Game Developers Conference is just around the corner and that can mean only one thing - leaks! The usual source is some murky deep throat, but in the case of Fable Heroes it’s Microsoft themselves that have dropped the ball. The listing for this XBLA exclusive 4 player online/offline co-op game has been posted on their site. Images and details follow.

It is pretty hard to tell exactly what Fable Heroes will play like from the brief description and handful of images that Lionhead have provided, but it is clear the game differs greatly from the main Fable games. The description of the game is somewhat of an oxymoron; promoting both co-op and competition in the same sentence:

Fable Heroes is a fresh spin on the beloved Fable franchise in which up to 4 players play both cooperatively and competitively in this hack-and-slash adventure. Work together as heroes of Albion to defeat familiar foes and new enemies while collecting as many gold coins as possible to unlock upgrades, characters, and items in both this game and Fable: The Journey for Kinect for Xbox 360.

Playing both with and against your friends is always tricky; perhaps you will work together to complete tasks, but your overall objectives will differ e.g. Call of Juarez: The Cartel? The images are also a very mixed bag; some suggest the game is a 4 player action RPG, whilst others are more in keeping with the Mario Party games.  These two game modes may provide the differing co-op and competitive elements of the game.

Still confused? Co-Optimus will be sure to unlock the secrets of Fable Heroes when it is released later in the year. Until then, have a look at the images yourselves and try and work out what exactly is going on!