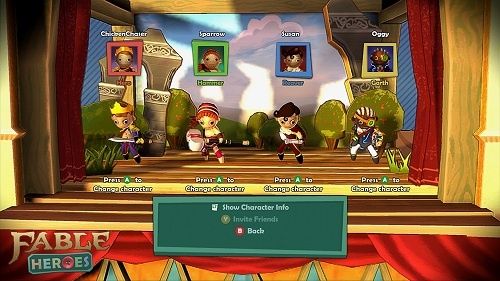 We have a fresh new trailer for the latest Fable game.  Fable Heroes is an offshoot of the series, allowing four players to team up for some good old-fashioned co-op action.  The new title looks to be a hybrid of Gauntlet-style hack and slash mixed with a collection of mini-games.  Check out the video to see the gameplay in action.

Fable Heroes reminds me of the Lego games, and that's not a bad thing.  This may make it a rather enjoyable family title.  According to IGN, there's a healthy mix of co-op and competitive play.  Players vie for coins (which are used for upgrades), make moral decisions with mischievous outcomes, and can give their co-op partners power ups (or downs) by accessing good and evil chests.

Heroes will also have some connectivity with the upcoming Kinect title Fable: The Journey.  Upon completing Journey a new character will unlock in Fable Heroes.   Players will be able to transfer the gold they have saved in Fable Heroes to their character in Journey.  I'm curious to see how else these title will correlate with each other. For now we'll have to wait.

Fable Heroes should be coming to the XBLA later this year.  It supports four player local co-op, four player online co-op, as well as combo co-op.