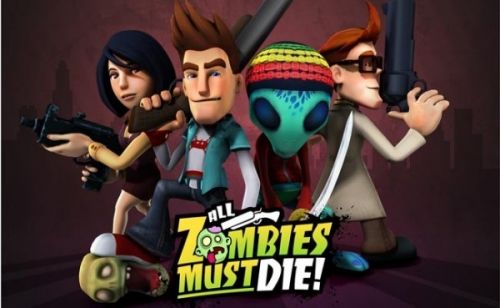 A bold statement like All Zombies Must Die does not sit easily with me. What about the random zombie who appears to still have some sort of brain process, don't they deserve to live? What am I saying, of course these flesh eating, panic causing, stench releasing deadites need to die! PSN and XBLA owners have been doing just this since December last year and now Steam players will get the chance when All Zombies Must Die is released on the12th March.

Co-Optimus  may not have been too impressed with AZMD, giving it a flat 2 out of 5, but that should not stop hardcore fans of generic twin shooters from giving the game a chance. Developers doublesix promise that the Steam version will have fixes and improvements; including a new 'treacle' mode that will allow you to wade through the masses of zombies, rather than being overrun as was so often the case in the earlier version of the game.

Another improvement is a reduction in the tasks that the in game gates continually ask of you e.g. kill 50 zombies before passing. These two tweaks may be enough to make the Steam version of the game a better experience, but also vindicate some of the issues mentioned in our review (which is nice). When it comes down to it - only you can save mankind, if not you, who else?

Below is a trailer for the PC version of the game that mentions the new highlights and fixes for the old lowlights: