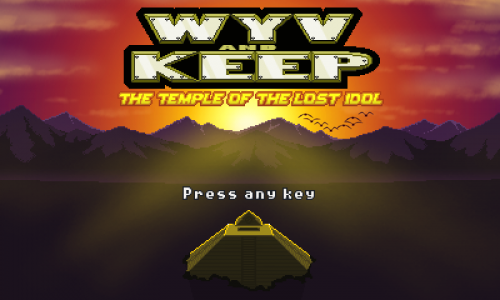 As a fan of any indie co-op title that combines two of my most nostalgic loves (8-bit or 16-bit graphics and puzzle platformers), I've been keeping an eye on a jolly corpse's Wyv and Keep. Described as a "grid-based puzzle/action game starring two young treasure hunters", players control the titular heroes, Wyv (pronounced "wiv") and Keep, as they explore ancient ruins in search of loot and a way out. While the game's been in development for some time, the game has reached that level of development where the developer's are accepting preorders (for just $7.99) and are releasing a little more than just a handful of screen grabs... including a demonstration of the online co-op in action!

Though brief, this video shows a little bit of how two players can work together (albeit not to the greatest of success in this particular example) in order to grab all those shiny coins, attempt to get past the not-so-friendly natives, and make it to the exit.

In addition to all of this, we got a little more info from the developer about what one can expect when Wyv and Keep becomes fully available:

Co-Optimus: How many levels does it currently have and do you have a planned final number for when it's considered complete?

a jolly corpse: The total planned number of levels will be 60. There will be 6 worlds, each with 9 levels and 6 bonus levels! Most of the puzzles are planned or completed, but there is always some fine tuning to be done! There are also an additional 10 levels we created for the demo, which are included in the full game as a bonus.

Co-Optimus: Does it support gamepads and/or the Xbox 360 controller?

a jolly corpse: Yes it does! Well...the 360 controller, anyway. Other gamepads are not currently supported without a 3rd party app such as " joy2key". We will be working on incorporating other joysticks in the near future!

Co-Optimus: Is multiplayer local-only or is online supported?

a jolly corpse: We support both local and online! Our online mode is up and running, but is currently under tested and has a fair number of known bugs. But we are encouraging our new players to help us test and make online better than ever! We will be updating on the regular as we fix known issues and add new features to the online mode.

Co-Optimus: Can the second player drop in or out of the game at any time, or is multiplayer a separate mode from the main game?

a jolly corpse: Locally a second player can join in at any time. Both Wyv and Keep are controlled with a single keyboard, so there is no difference between single and local co-op play. If you're a fancy player, you can control both players at once!

Co-Optimus: Do you plan to release the game on Steam? If so, have you communicated with them on the subject?

a jolly corpse: We would love for the game to be released on Steam. We have no communicated with them yet, but we plan to in the near future. Once the online mode is a little closer to completion.

Co-Optimus: If the game is coming to Steam, will people who buy the Alpha Collection bundle receive the Steam key down the line?

a jolly corpse: Yes sir! That is the plan. We have had communications with the fine folk at Indie Royale and they indicated this was quite likely!

Co-Optimus: What was the game's original release date?

We'll undoubtedly have more information, and possibly some hands-on impressions of the current preview build of the game, coming soon.