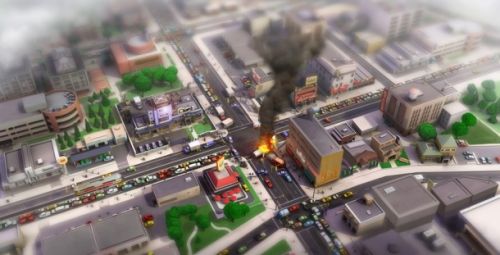 A brand new Sim City is coming in 2013 from developer Maxis and it may be their most ambitious version of the game yet.  I have pretty fond memories of playing Sim City 2000 in a hot seat co-op fashion growing up, but having some true co-op objectives based around a city building simulation sounds incredibily enticing.  Similar to CitiesXL, the game will feature a large focus on social gameplay and building regions with friends, providing a persistent simulation that lasts over time.

The new game is being built on a brand new engine called GlassBox, something that according to PC Gamer, could be the "most revolutionary thing Maxis has ever created."  From a studio who has created The Sims and Spore, that's quite a statement.

The previous SimCity games rely on relatively high-level statistics to tell us what’s going on–the pollution number goes up, so the happiness number goes down. GlassBox does the opposite. It simulates the little things–thousands of individual Sims–and lets the city mechanics emerge naturally. You won’t have to look at a spreadsheet or graph to identify a crisis, because you can watch it all happen in real-time. Pollution will taint the soil and thicken the atmosphere with smog, Sims will get sick and fill the hospitals, businesses will lose employees, and everyone will be really ticked off about the whole thing.

Here's what Sim City will offer:

Creative and customizable world that offers unique gameplay benefits, all with a fun tactile interface.

The Sims in your city speak to you directly and it’s up to you to respond to their needs. Will you listen and be the toast of the town? Or abuse your power for fame and fortune?

Specialize in What You Love

Mold your city as a casino resort, manufacturing hub, educational enclave, and more, and then watch as a unique look and feel spread throughout your city.

Build a region with friends for the first time! Collaborate or compete in regional and global challenges and make decisions that impact the greater SimCity World.

The multiplayer aspect of the game promises support for up to 16 players.  With a release date of 2013, it's still a ways away but it already looks like Sim City (2013) has some impressive potential.  Here's a teaser video from GDC.