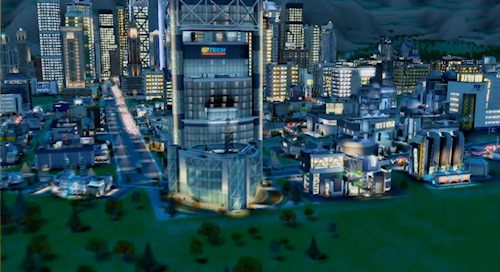 We've been keenly eyeing SimCity for a while now, anxious to see Maxis return to the game that spawned the studio.  The latest iteration is a lot more ambitious than previous games, not only blending Sims like statistics on a micro level, but larger intra-city possibilities on a macro level.  All of this was actually birthed from looking at previous games and the isolationist experience they gave - which - in relation to the "real world" isn't so real after all.

If you look at real cities, they all clearly do distinct things and have identities based around those things, I wanted to let cities differentiate themselves and let them find some way that wouldn't automatically make them converge, and allow them take on unique identities.

The networks of different cities and their relationships was something that I thought was worth trying to capture, SimCity is always kind of a lonely experience; you're planning your cities all by yourself. One of the ways that things you do take on significance is how they affect other people. The things that you do for other people give meaning to your own life and your own existence. I wanted to make cities more resonant and meaningful, and thought they would have more presence if they were doing things for other cities as well. The cities matter to the people around you, not just to you.

That's quote come from creative director Ocean Quigley.  He goes on to say that what really drove home the idea of cities specializing and then working together on a broader scale was the stories that came from previous SimCity games.  People would describe how different and unique their city was, but at the end of the day, you'd have to have X,Y, and Z to make it work - and since every city has X, Y, and Z they were - in essence - all the same.

SimCity is really shaping up to be something special, if Maxis is capable of delivering on these promises, we could have the best SimCity game to date and something really addictive.  The game is set to be released on March 5th, 2013.

We've posted a new video below and you can check out Ocean Quigley's blog for a ton of new screenshots.