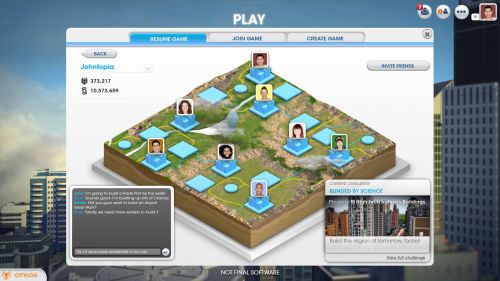 It's been unclear exactly how friends can cooperate in the new Sim City, but we did know there was going to be a strong social aspect to the game.  Now the latest developer diary for the game has revealed a great deal just how cooperative the reboot of the classic series is going to be - and frankly - it's incredibly impressive.

Up to 16 players are able to join a region in Sim City and in each region there are areas to claim to build your own city.  Cities within a region join a network of resources that all effect each other.  In the video we see how one city runs low on power, so a friend's city can focus on building a power infrastructure and it'll automatically sell the extra power to where it's needed.  Don't have enough firemen?  They can be sent in from different cities.  Everything that happens within a region effects the entire region and can benefit it.

In summary, it looks like EA has nailed a co-op city build sim.

Sim City is going to be available on the PC in March of 2013.