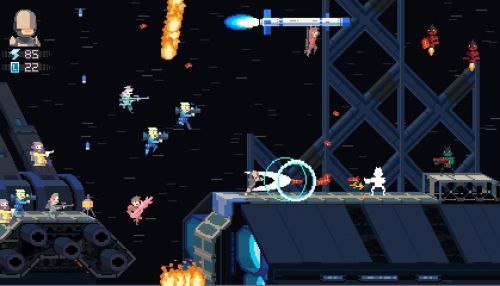 What was the prize? Full sponsorship to fund the remainder of the project and a guaranteed first-party publishing deal, as well as support services, with Xbox LIVE Arcade and the Windows phone. Pretty sweet gig, right? You would probably recognize Capybara Games mostly known for their iPhone game Superbrothers: Sword & Sorcery EP, which has been currently been selected as one of the best mobile games to purchase from the iTunes store. Now that they are on the path to finishing Super T.I.M.E. Force, Capybara Games looks to take that indie developer spotlight yet again and show the world (and Xbox LIVE) what they’re truly made of in.

So how did this game take the gold at the Independent Games Festival? Just take a look for yourself::

Sporting a futuristic, but retro, 8-bit style, STF seems to involve storming spaceships and compounds with a huge group of combat soldiers looking for blood. In the simplest of terms, it looks like Contra on massive amounts of crack. The number of laser blasts and explosions firing off constantly are enough to get your heart racing, let alone the number of units running around doing different things at once. It's truly a work of art and rightfully deserved the win.

While there is little to no detail regarding its release date (the “Coming in the Year 198X” was pretty clever) or even multiplayer capability, we are betting STF will include some kind of co-op aspect if it will take after any of its side-scrolling predecessors. If we hear anything, we’ll definitely fill you in!

Best of luck to you, Capybara Games, and congratulations on earning this awesome reward!