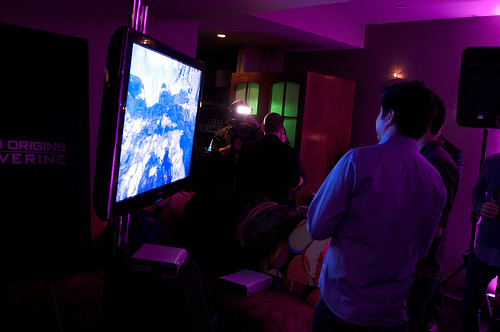 Last night we were lucky enough to get some hands on time with upcoming Activision games for a pre-NY Comic Con event.  We examined the ex co-op game Prototype, slashed some bad guys in X-Men Origins: Wolverine, and met our old friend BJ Blaskowitz it's Wolfenstein.

When we launched Co-Optimus a little more than a year ago, Prototype was a game that was often discussed.  The open world style, combined with a superhuman character, reminded folks of Crackdown; and the promise of co-op further solidified that.  But alas not everything is roses and rockets, and soon we found out cooperative play was canned.  After several delays and a few months later I finally got some hands on time with a pre-beta build of the game for the Xbox 360 last night in New York City.

The demo level took place in Times Square in NYC, so the GTA IV comparisons will be immediately made.  I gotta say, despite the chaotic setting I was thrown into, Prototype's NY has a more real feeling than GTA.  There seemed to be more life crowding the streets of the famous NY Landmark.  The developer told me that this was their version of NYC, so don't think this is a one to one creation, despite that I was impressed.  The main character, Alex, has a bit of a problem.  Namely, he seems all raged out and wants to blow up everything in his path with superhuman mutant abilities. You can jump huge distances, scale the side of buildings, throw cars, and manifest different weapons from some sort of substance inside of you.

My first task in the demo was to eliminate enemy soldiers in the area.  I felt like Spider-Man playing as the Incredible Hulk as I leapt around picking up guys, smashing enemies and punching and kicking my way to victory.  The character and fighting controls feel something like you'd experience in Devil May Cry rather than Crackdown.   It works well, though I found myself fighting the camera at times.  After the soldiers were eliminated it was onto the tanks.  I began by jumping on top of the tank and smashing it to bits with my combos.  "You know you can just throw some taxis at it, right?" chimed in the Developer.  Well now I do, and soon it was a demolition derby in Times Square. 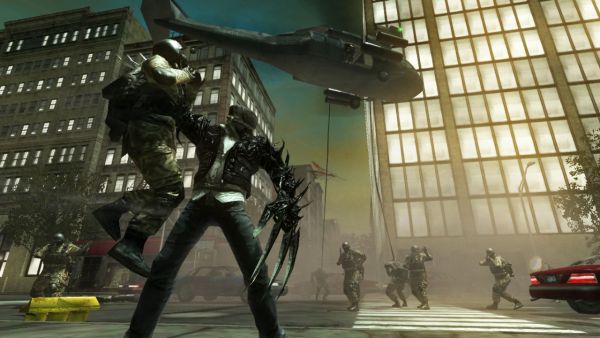 This won't end well...for the military.

Next up...the helicopters.  I quickly scaled a building and leapt out to begin attacking the chopper.  I wasn't able to actually get inside it and take control, though we've seen videos where you can.  Dropping down below I was attacked by more tanks, this time though I decided I'd like to "borrow" one.  And so I did.  And so the helicopters blew up.  And so I beat the demo. And so I was happy.

At that point in the game, things actually seemed a bit to chaotic for anything more than button mashing co-op play.  So perhaps it was wiser to pull it.  I was told that was actually the intro level, and then the game begins with a flashback to 15 days earlier with Alex laying on a slab in a morgue.  Sounds very Hollywood, I can't wait for this "summer blockbuster" release in June.