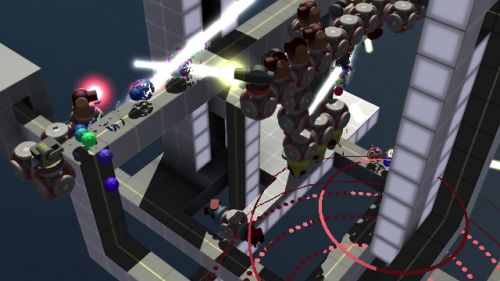 Tower defense is one of those genres that's on its way to being done to death. But that doesn't mean there aren't lots of unique and compelling tower defense games. Indie PC title Terrorhedron fits such a description - its truly three dimensional levels and 8-player online co-op certainly deserve a little attention. Said attention should be much easier to receive now that the game is available on several major digital distribution platforms.

When we first mentioned the game back in January, Terrorhedron was only available for purchase directly from the developer's site. You can now find it at Gamefly (formerly Direct2Drive), GamersGate, Impulse, and of course, its original home at MCRO.org. Each site sells it for $19.95, but GamersGate also offers a four-pack for $59.95 (25% off). The distributor we'd really like to see offering Terrorhedron, Steam, has yet to start offering it. Creator Dan Walters is still working to change that (and offer some enhancements like Steam Achievements).

Terrorhedron: 3D Co-Op Tower Defense is a tower defense game that spreads enemy paths not only along the floor but also walls and ceilings. It sports a unique geometric look and catchy chiptune soundtrack. All that plus 8 player co-op online co-op. See our impressions for lots more details.