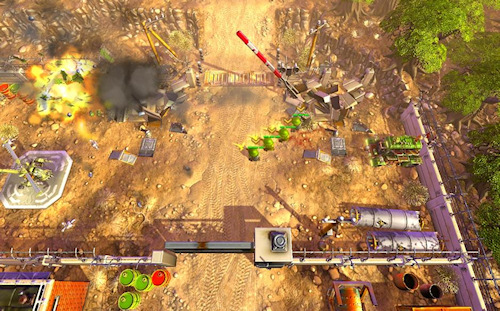 As a long time PC gamer I have fond memories of the Cannon Fodder franchise.  It was a game where you controlled a mini group of soldiers that either lived or died on deadly missions through the jungle, desert and snow.  If they lived, the characters (all named) moved on to the next, if they died, their grave was added to the list of the fallen.  Because of this, you became attached to the little guys, and did everything in your power to make sure they survived to see the next battle.  Despite what sounds like a sobering game, it was incredibly entertaining - and actually quite silly.

It's been some 18 years since the original was released, but now we've got the first full fledged sequel since Cannon Fodder 2, and believe it or not, it's NOT a first person shooter.  Instead Cannon Fodder 3 is a modern day remake of what we loved about the series so much.  Action mixed with strategy mixed with ridiculous explosions and blood.

Best of all is Cannon Fodder 3 supports online co-op play, something the series has never had before.  Players can split up the group of four soldiers and take them through the game's missions.

So if the names Jools and Jops have a special place in your heart, you might want to check out Cannon Fodder 3.  Here's a video of some of the co-op play to help you decide as well as the original game's 3D intro.  It was state of the art at the time.