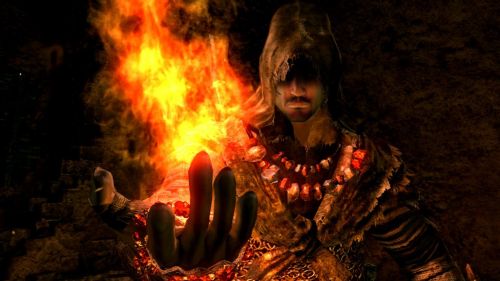 By my calculations, I haven't posted anything about Dark Souls in about 68 days. Amazing, I know. Luckily for me (and you) Facebook has given us something post-worthy. 21 hours ago the official Dark Souls page began teasing an announcement. There has already been rampant speculation concerning DLC or a PC port, both of which would be well received by the community.

A brick wall is pictured, and apparently it can be broken down by people "liking" the page. No, not the Dark Souls page, the actual "wall app." Time to spam my elderly relatives with Dark Souls posts. Help a Hollow out and do the same. The wall already has over 6000 likes, but remains unscathed. I'm curious to see what it looks like in a day or two... What's behind the wall? SERIOUSLY. I NEED TO KNOW.

Then there was this ad spotted in an Australian gaming magazine, PC PowerPlay. The image was posted on Evil Avatar. It would appear that a PC port is in the works. The Dark Souls for PC petition currently has over 90 thousand signatures. Maybe NamcoBandai should start a Kickstarter to fund it. Those seem to be popular. Personally, I'm hoping for DLC, but it would be nice if Dark Souls came out on PC. Misery loves company.

Dark Souls is available now for the Xbox 360 and PlayStation 3. It supports three player online co-op.