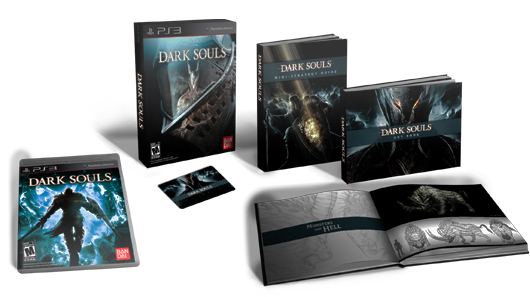 The North American version of the Dark Souls Collector’s Edition now includes just the following physical bonus items: a metal case and art book. The mini-strategy guide and making-of-videos are now digital downloads. They join the soundtrack, which was always set to be a download. The soundtrack I don’t mind as I always rip my CDs to MP3 and listen to them that way, but changing the guide to a PDF certainly limits its usefulness for many.

Even though it now lacks a bit of luster, the Collector’s Edition of Dark Souls costs the same as any standard game - $59.99, so there’s little reason to despair. The important part is that Dark Souls will be a beautifully hardcore, soul-crushing action-RPG with unique co-op elements. Gamers who need a proper physical guide can always pick up the lavish and encyclopedic Dark Souls Official Guide from Future Press (pictured at right), which Amazon sells right here.

Dark Souls lands on October 4. You can preorder the Collector’s Edition from Amazon, GameStop, Best Buy, and Walmart. If you want the deluxe case you’ll need to hurry, because Amazon is already sold out of the Playstation 3 Collector’s Edition.

Note: The European version still includes a making of DVD and soundtrack CD, with the digital mini-guide like the US version. No metal box or art book though, so it's kind of a toss-up as to which version is nicer.